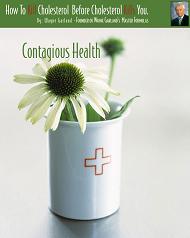 This book with step-by-step instructions to naturally bring down dangerously high cholesterol, triglycerides and homocysteine levels, has saved many people’s lives without drugs or surgery – it might just save yours too! For a personal consultation to review your specific health situation, contact our Support Team at 877-975-9080 to schedule a Critical Health Assessment.

My husband Carl had 100% blockage in two main arteries and the other was 60% blocked!

Last year, my husband started to have chest pains when working in the yard or out in the cold and he was very tired all the time. The doctor ordered a heart catheterization and found that all three arteries had clogged up, two were 100% totally clogged, and the other had over 60% blockage. Carl’s cholesterol level was over 600. (no, this is not a misprint) and his triglycerides were 1,233! (again, not a misprint.)

Carl had a triple by-pass operation 13 years ago and wasn’t about to go through it all over again, as the pain nearly killed him the first time. So, the doctor put a stent into the one artery with only 60% blockage and said that was all he could do for Carl.

The foods we ate were fresh and all vegetarian – salads and lightly steamed vegetables with virgin Olive oil and lemon dressing. Wayne’s Miracle Potassium Broth soup was eaten every day with lots of broccoli and cabbage and garlic. And Flax Seed Oil stirred into it. No white sugar, no white flour. 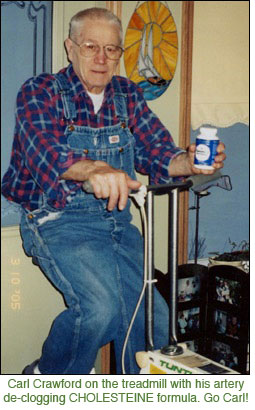 Carl also started taking Wayne’s Cholesteine formula at high dosages. After one week, we went back to check the stent with the heart doctor and Carl’s cholesterol dropped nearly 400 points to 221! (not a misprint) His triglycerides were now 504. In just one week!

We then added Wayne’s Circulatory Support and the Life Transfusion Liquid Minerals with high Magnesium to help Carl’s heart beat easier and to dissolve the Calcium in the arteries.

We thank God for Dr. Garland’s guidance and caring enough to show us the true way to a healthier life, free of disease.

Download the eBook that has saved many people’s lives without drugs or surgery – it might just save yours too! For a personal consultation call our Support Team at 877-975-9080.