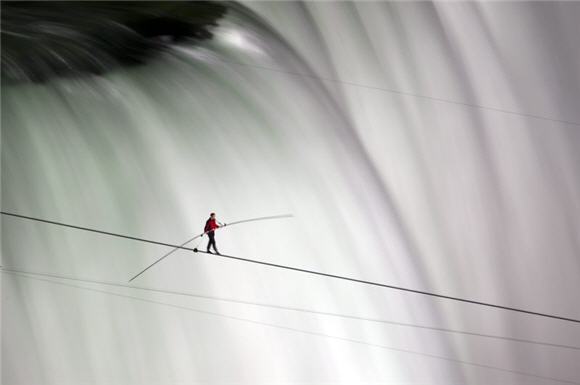 On June 15th, 2012, two hundred feet in the air above the roaring waters of Horseshoe Falls, the largest of Niagara Falls, daredevil Nik Wallenda walked 1,500 feet across on a 2 inch wide, tightrope.

His feat was historic. No one has ever crossed Niagara Falls before on a highwire.

33 year old Wallenda endured blinding mists and gusting winds from the powerful Falls below to cross in just 25 minutes.

Even with so many difficulties ahead of and below him, Nik Wallenda shared before the crossing the Falls that he hoped the experience would be “peaceful and relaxing.”

Looking down from 200 feet above the Falls, it’s impossible to imagine even the hint of peace and relaxation! Walking over Niagara Falls is the opposite of peaceful!

Think a second about your own life on a wire – commuting, your job, kid’s activities, family crisis, personal appointments – how often life feels like we are constantly on a wire walking across Niagara Falls, with the waters below roaring and threatening to pull us under.

Can you imagine the storms of life coming at us with hurricane force winds – and then feeling relaxed and at peace?
Restore Your Balance
Remember our philosophy of Body as Doctor? Your body knows what it needs and if you allow it to, it will naturally achieve “total balance” in a way that nothing else can.

Ancient Chinese herbalism teaches us of the Three Treasures, the essential energies that sustain human life.

Most of us run on Qi energy, always on the go at full-tilt. When we run out of fuel, we reach for another cup of coffee, soda or candy bar to power through until we collapse at night. Burning your “Chi” is like burning kindling instead of firewood. Kindling burns hot and fast and is gone before you know it. If you have ever suffered burnout, you know firsthand what I’m talking about.
END_OF_DOCUMENT_TOKEN_TO_BE_REPLACED

Did you know 50 million Americans suffer with snoring and its partner, sleep apnea. According to shocking new research, snoring and apnea are associated with up to 90% of all known diseases and chronic conditions.

Snoring and Apnea have been linked to CANCER in a University of Wisconsin School of Medicine and Public Health study. Dr. Javier Nieto found that participants with the most severe sleep disordered breathing were 5 times more likely to die of cancer than those with normal breathing!

Are you snoring and sick all the time? Read on to find out how to STOP snoring and live longer.

Did you catch the ABC News and Fox News special reports recently explaining the link between cancer and sleep disordered breathing (the medical term for snoring and sleep apnea) where oxygen flow is significantly reduced or even cut off, while sleeping.

The news reports came about from two new studies following 1,500 people in America and more than 5,000 in Spain, were presented at an international conference just a few weeks ago. In both studies, researchers ruled out the possibility that the usual risk factors for cancer such as age, smoking, alcohol use, physical activity and weight played a role in the results.

Dr. Javier Nieto of University of Wisconsin School of Medicine and Public Health found that individuals with the most severe cases were 5 times more likely to die of cancer than those with normal breathing!

In the Spanish study, Dr. Miguel Angel Martinez-Garcia of La Fe University and Polytechnic Hospital found a 68% greater likelihood of developing cancer in test subjects whose oxygen levels dropped below 90 percent compared with those whose oxygen levels did not plummet.

Please take a moment right now to watch the videos.