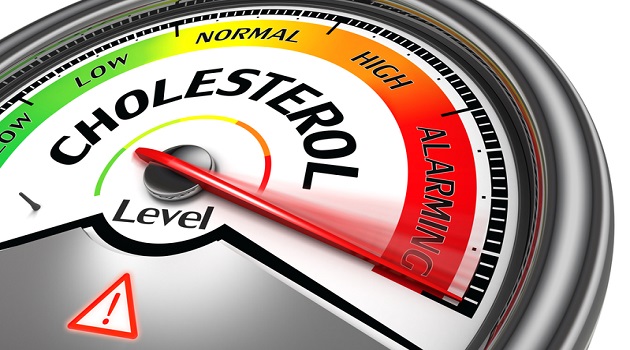 I was terrified of having a heart attack like everyone else around me, so I turned to my natural healer, Wayne Garland and his team for help.

I refused to take a statin drug like Lipitor becaue I knew how dangerous they can be. Wayne asked me to stop eating eggs (one egg has 187 mg of cholesterol!), banned meat and all dairy, and started me on the magical Cholesteine formula.

After just one month on the formula and dietary changes, MY CHOLESTEROL PLUMMETED by 78 points and my LDL dropped 71! In one month!

I am just about finished with my first month on Cholesteine (3 caps w/lemon in am, 3 caps w/lemon in pm), and will move to the second month (reduce the dosage to 2 in am, 2 in pm). I’m also increasing my activity and exercise level, and avoiding eggs, meat & dairy.

Seeing such dramatic results so soon is VERY motivating for me to keep on going! (And I am referring another coworker of mine to you, especially regarding the Cholesteine product.) 🙂 Thanks so much!

You saved my thyroid and my life once. Now you’ve saved my heart!“ 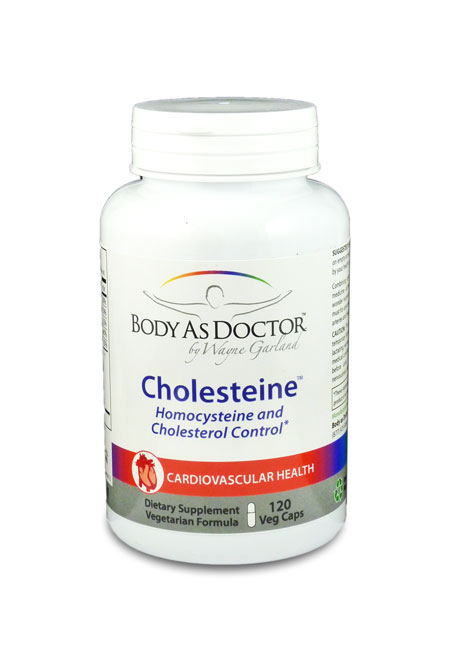 Get Cholesteine and Get Heart Saving Results In Just 28 Days!

Cholesteine is the world’s first all-natural means to fight the “silent killers” of both high cholesterol and homocysteine.

Cholesteine is our ultra-powerful formulation, with its unique, powerful minerals, Chinese herbal compounds, amino acids and Trimethylglycine, the wonder-nutrient for Homocysteine control.

With heart disease now our country’s #1 killer, every person should consider the necessity and importance of cholesterol control, and make this formulation part of their daily regimen.

If you, or anyone you know, has high blood pressure or is at risk for heart disease, our book, Kill Cholesterol Before Cholesterol Kills You was written just for you!

Download your copy of this book as our personal gift to you!

Don’t know where to start? Call our Plant-Strong Support Team for assistance in reviewing your current lifestyle and creating a transition plan to a plant-strong lifestyle!

Did you know the first sign of a heart attack is often death?
Over two-thirds of Americans suffer from some kind of cardiovascular disease; heart attacks, strokes, clogged-up arteries, dangerously high cholesterol and homocysteine, hypertension, high blood pressure and diabetes.

According to the CDC, nearly a million American’s have a heart attack every year and 1 in 4 deaths are heart related – and utterly unnecessary!

Cardiovascular disease kills more people every year than every other disease combined.

Heart disease costs over $100 BILLION every year in health care services, medication and loss of productivity.

This tragedy can be avoided for YOU and everyone you love!

For the Biggest Heart Day of the year…Valentine’s Day, we have our wisdom and our amazing heart formulas as a special gift for you.  Read on!

Americans: The Most Malnourished People on the Planet
Obesity is also a chronic problem in all age groups and getting worse by the second.

Conquering what I call the Foot and Mouth Disease; a lack of exercise and eating too much of the wrong food – has an immediate impact in reversing both of these epidemics.

The absurd truth of the matter is that the majority of Americans are among the most malnourished people in the world.

The meat and dairy industries have brainwashed our entire nation into believing these highly dangerous sources of food, calcium and protein are safe, when in fact, the reverse is true. The medical and pharmaceutical industries are either highly ignorant or purposely pretending to be so in order to make huge profits.

Plagued by obesity, cancer and heart attack rates that are the highest in the entire world, Americans are literally being killed by what we eat.

END_OF_DOCUMENT_TOKEN_TO_BE_REPLACED

Popeye’s secret has been revealed. His super strength, energy and low blood pressure wasn’t the Iron in his spinach after all. (Even though this is what we were told by the know-it all medicos that made Popeye so strong!)

Instead it was a compound most of us have never heard of called “Nitrate”. Nitrates, which are found in green, leafy vegetables (like spinach) trigger the body to make “Nitric Oxide”.

Listen closely, as Nitric Oxide could be the biggest means of quickly and naturally controlling HIGH BLOOD PRESSURE the world has ever seen.

And we’ve got it for you! But best of all you don’t have to eat a ton of spinach to reap the rewards!

I believe with all my heart, that Nitric Oxide and its benefits will have profound effects on some of the biggest “secret killers” in our society:

In the USA, February is American Heart Month and what an ideal time for us to introduce our newest Heart Formula that super-generates Nitric Oxide, to help prevent our number one killer, Heart Disease.

This new formula is called, logically enough, “Clean Heart“. And that is precisely what it does – it “cleans” the heart of the gunk, goo and plaque that causes sudden strokes, fatal heart attacks and worst of all HIGH BLOOD PRESSURE. Some people who tested “Clean Heart’ said their HIGH BLOOD PRESSURE started coming down after just one week!

The phyto-nutrient “Nitrate” is massively abundant in green leafy vegetables like spinach, kale, collard greens and it dramatically boosts the powerhouses in cells called mitochondria which provide energy. Just a single helping of spinach is enough to increase the efficiency of mitochondria, small bean-shaped “engines” which fuel cell activity and growth.

Spinach, the most famous green vegetable, is well known as the superfood that gave Popeye the Sailor Man his bulging muscles. The famous cartoon character, who dates back to the 1930s, popped open a can of spinach whenever he needed to get out of trouble.

Originally it was thought that the Iron content of spinach made it a power-food. Now scientists have learned that Nitrates are what that the body uses to make Nitric Oxide. This is the true energy-boosting ingredient in the vegetable.

END_OF_DOCUMENT_TOKEN_TO_BE_REPLACED

For several years I have been helping children with autism make giant strides in their mental capacities. Autism is a frightening epidemic and getting worse by the moment.

The biggest thing that turns children around is an extraordinary discovery I made that the Russian’s used to super-boost their athletes for the Olympics. So too did the East Germans when they were at the forefront of Olympic performance and records.

Mislabeled for years as vitamin B-15, DMG is an effective energy booster, stamina-enhancer and cardiovascular-building nutrient, as it makes the process of metabolism in the body quicker and more efficient.

Muhammad Ali even called it his “secret weapon” in becoming the heavyweight champion of the world.

END_OF_DOCUMENT_TOKEN_TO_BE_REPLACED

A fascinating study has just been published in the September 2008 edition of the prestigious journal Neurology. This study convincingly showed how “Brain Shrinkage” or “Brain Atrophy” is now at epidemic proportions in the Western world.

Could this be why we have so much Alzheimer’s, Autism and Attention Deficit? There is an answer, a profound one that everyone with a brain needs to utilize.

END_OF_DOCUMENT_TOKEN_TO_BE_REPLACED

Do you know what your Homocysteine level is? Has your doctor ever mentioned it? Probably not.

But it’s now recognized by leading, intelligent doctors and researchers as more deadly than high cholesterol.

Do yourself a giant favor and next time you’re in for a blood check, make them do a Homocysteine check too, it won’t take a second and could save your life.

When the levels of a substance called “Homocysteine” in your blood becomes too high, the perfect conditions are created for plaque buildup. This is what killed Tim Russett.

An amino acid, Homocysteine, promotes the growing of smooth muscle cells just below the inner wall of the artery. Multiplying rapidly, these cells create a deadly bulge that protrudes into the artery itself. On the bulge, cholesterol, blood products, and calcium begin to accumulate.

These are the blood traps that lead to problems like impotence, poor memory, heart attacks, strokes, and even death.

And research indicates that you should be just as concerned, if not more so, over your Homocysteine level as you are over your cholesterol levels.

END_OF_DOCUMENT_TOKEN_TO_BE_REPLACED

Just when you think you know everything about the power of natural healing, along comes a new discovery that rewrites the history books.

That’s what you are about to read all about, courtesy of one of my patients who sent me a sample and the background to an extraordinary compound, unheard of in America until now, that has equally extraordinary power to dramatically dissolve clogged arteries, reduce painful inflammation and stop pain “cold in its tracks”.

And it’s not a drug. No prescription needed or dangerous side-effects to contend with. Mother Nature to the rescue, once again.

END_OF_DOCUMENT_TOKEN_TO_BE_REPLACED

The latest news from the pharmaceutical and food industries really takes the cake.

Diet Coke, Diet Pepsi, Diet 7-Up and Diet Dr Pepper actually put on weight rather than taking it off!

Those of you who read my November 7th article regarding the dangers of sugar consumption and sugar substitutes know that I have been screaming about the dangers of these insidious foods, marketed fraudulently as “diet” solutions, when in fact they are the reverse.

But there is something more dangerous lurking in these liquid poisons.
END_OF_DOCUMENT_TOKEN_TO_BE_REPLACED

This book with step-by-step instructions to naturally bring down dangerously high cholesterol, triglycerides and homocysteine levels, has saved many people’s lives without drugs or surgery – it might just save yours too! For a personal consultation to review your specific health situation, contact our Support Team at 877-975-9080 to schedule a Critical Health Assessment.

My husband Carl had 100% blockage in two main arteries and the other was 60% blocked!

Last year, my husband started to have chest pains when working in the yard or out in the cold and he was very tired all the time. The doctor ordered a heart catheterization and found that all three arteries had clogged up, two were 100% totally clogged, and the other had over 60% blockage. Carl’s cholesterol level was over 600. (no, this is not a misprint) and his triglycerides were 1,233! (again, not a misprint.)