Think you’ve heard all there is to know about miraculous Vitamin D-3? I did.

And then someone sent me a full, in-depth report that really opened my eyes and made me, a passionate advocate for Vitamin D-3 for years, literally double my daily intake! So should you, or so WILL YOU, when you read this extraordinary report.

Ever since the misguided medical advice to avoid sunshine (which makes over 90% of our Vitamin D), health problems associated with low levels have skyrocketed.

Vitamin D is not only a vitamin, but also an important hormone, with deficiencies causing widespread problems.

In fact, Vitamin D deficiency in the United States alone:

Because Vitamin D is stored in the fatty tissue (fat soluble) instead of being washed out in the urine (water soluble), it is possible to overdose if you get too much. This scares people away from getting the optimal dose, even though 10 times our current RDA (also known as “Ridiculously Low Allowance”) of 400IU’s a day is safe.

For those with decreased bone density, the dosage recommended is from 2000-4000 units a day. Otherwise, 1000-2000 units a day is optimal. Most importantly, remember to go for walks and get your sunshine.

Sunshine is good for you! For optimal health, avoid sunburn – but not your sunshine. Get 15 minutes of sunshine on your near-naked body at mid-day, when the sun is at its highest.

A review in the Mayo Clinic Journal showed that approximately 36% of healthy young adults and 57% of general medicine in-patients in the US have inadequate levels of Vitamin D. It is even more common in people with chronic pain.

This problem has increased since skin cancer awareness prompted many to forego sunshine. The misguided advice from well-meaning, but anti-vitamin doctors and the media, was given to decrease the number of dangerous skin cancers called “melanomas”.

However 90% of our Vitamin D comes from the sun, and the skin cancers usually caused by sunshine, like basal cell cancers, are usually quite benign and easy to treat.
In fact, most melanomas are not in sun-exposed areas: they develop on skin covered by clothing.

It is likely that the increase in melanomas is mostly occurring because of changes in diet, environment and sleep patterns, which are resulting in weakened immune systems. A good rule again is to avoid the sunburn, but not the 15 minutes of daily sunshine. Just stick to the 15 minutes a day before 11.00am rule, and you will be fine.

Many other cancers increase in the face of Vitamin D deficiency, and it is currently estimated that the advice to avoid sunshine is resulting in as many as 85,550 unnecessary cancer deaths each year.

To give you a few examples, increasing Vitamin D levels is associated with: 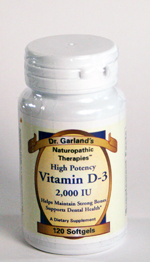 Vitamin D deficiency also contributes to weak bones and osteoporosis. For 98% of the elderly who break their hips, it’s due to low Vitamin D levels, a major cause of these people losing mobility, independence and therefore being isolated in nursing homes. And Vitamin D deficiency in pregnant women actually increases the risk of her child developing osteoporosis later in life.

This leaves the question of what level of supplementation is optimal. Let’s listen to what the Harvard School of Public Health say,

“Recent evidence suggest that Vitamin D intakes above current recommendations may be associated with better health outcomes, an intake for all adults of at least 1000 units of Vitamin D per day is needed.”

Just recently a major, mega-analysis of the powers of Vitamin D was published in the Archives of Internal Medicine. The results were simply astounding and I wanted to share them with you as everyone needs to know about one of the greatest natural medicines ever discovered.

The message coming from a new mega-analysis by the International Agency for Research on Cancer in France and from the European Institute of Oncology in Italy confirms that high levels of Vitamin D-3 have a striking ability to fight all diseases – particularly cancer, heart disease, degenerative bones and diabetes. For just a few cents a day, we can all practically “disease-proof” our bodies with this miracle Vitamin.

The end result was loud and clear – “those individuals who took Vitamin D every day had a massively lower risk of death than those who did not take it.”

Thank you and may God and His Vitamin D-3 be with you always!”

One Reply to “Vitamin D could save your life!”