The New York Times published a story about the total failure of three leading cholesterol drugs that went mostly unnoticed. A clinical trial of Zetia, prescribed to millions of people a week, failed to show the drug had any medical benefits.

Dr. Steven Nissen, the chairman of cardiology at the famed Cleveland Clinic, said it best, “The results are shocking. Patients should not be given prescriptions for Zetia…This is as bad a result for a drug as anybody could have feared.”

I’ve been shouting from the rooftops for years about the dangers of cholesterol drugs.  Natural alternatives exist that get to the root of the problem, rather than just masking the symptoms.

A two year clinical trial of Zetia has shown that the drug has no medical benefits, adding to the growing concern over Zetia and Vytorin, a combination of Zetia and Zocor.

While Zetia did lower cholesterol by about 15%, no trial has ever shown that it can reduce heart attacks and strokes – or even that it reduces the growth of dangerous fatty plaque in arteries which causes serious heart problems. The trial was originally designed to show that Zetia could reduce plaque growth. Instead, the plaque actually grew twice as fast in patients taking Zetia with Zocor!

To make matters worse, the drug companies have “sat” on the results for two years. Which raises serious questions about both the drug’s effectiveness and also about the behavior of the pharmaceutical companies that conducted the study.

Merck and Schering stalled for two years, repeatedly missing strict deadlines for reporting the results.  Leading cardiologists around the world were left to wonder what was going on and what the study would show. At the same time, millions of patients continued taking Zetia and Vytorin and their conditions worsened while the drug companies blithely fiddled their thumbs.

Making billions of dollars at the expense of these patients. Lawsuits will obviously be filed. But what good is that to a person who trusted their doctor and the flashy television commercials and suffered a heart attack or strokes.

I’ve eliminated high cholesterol for so many people. The program I recommend is the same plant-strong diet that former President Clinton adopted in 2010 and is now in the best health of his life. (If you missed the story, read The Veggie Butcher & President Clinton.)

The program is a plant-strong diet with daily exercise and the elimination of high saturated fat foods that your body cannot process – that means no more milk, cheese, ice cream and butter, or animal protein like red meat, pork and chicken. Substitute nut milks instead, such as cashew, almond, coconut or hemp milks. Switch to Earth Balance Natural Spreads instead of butter.

We have had so many customers share their story about lowering cholesterol. Visit the Testimonials category on our website to read them all.

One of my all-time favorites is the story of Carl Crawford, who previously had triple bypass surgery, yet his cholesterol level was over 600 and his triglycerides were over 1,200! His wife Annette, fearing he wouldn’t survive another open heart surgery, asked if I could help. 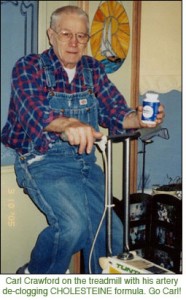 To make a long story short, we brought Carl’s cholesterol down to 154 and his triglycerides down to 235. His blood pressure dropped from 145 to 105.

Click here to read the full story of how Carl Bypassed a Bypass.

The Formulas Carl used are the ones I recommend to everyone with high blood pressure, cholesterol and clogged arteries:

More Tips and Suggestions:
From my eBook: Kill Cholesterol Before Cholesterol Kills You. Download your copy now.

It just does not have to be – and it also does not mean being held hostage to dangerous drugs!

Join with us and Mother Nature, take our formulas, watch what you eat, exercise each day religiously, and all you will have to show for it is a happy heart, beating in time to your journey through life.

God be with you.