Have you seen President Clinton lately?

“Honey, we shrank the President!”

He dropped 24 lbs and looks fabulous. He says he weighs the same now, as he did in high school. How many of us can say that?!

I hear he did it for two big reasons: his daughter Chelsea’s wedding and his continually clogged-up arteries.

Read on for the “rest of the story”…

Chelsea Clinton is vegan and has been pleading with her father to change his “Bubba Diet” for years to no avail. But with her wedding coming up, she laid down the law and instructed her father to slim down for the big event.

Clinton himself knew he had to do something, as his arteries kept clogging up. Last winter he needed to have a stent replaced after having quadruple bypass surgery in 2004. His life was being threatened by the spare ribs and highly saturated southern food he’d eaten all his life.

After his days as Governor of Arkansas and President of the United States, Clinton is a voracious reader and a fast study of information and reports. He devoured every bit of information on vegetarian diets and unclogging arteries. (And he learned about what we’ve been preaching in our newsletters for years!)

“I did it because after I had this stent put in, I realized that even though it happens quite often, that after bypass surgery you lose the veins because they’re thinner and weaker than arteries, the truth is that it clogged up, which means that the cholesterol was still causing buildup in my vein that was part of my bypass.

I didn’t want it to happen again. So I did all this research and it says that 82% of the people since 1986 who have gone on a plant-based, no dairy, no meat of any kind — I eat very little fish — 82% of the people who have done that have begun to heal themselves. Their arterial blockage cleans up, the calcium deposit around their heart breaks up.

Recently, CNN’s Wolf Blitzer sat down with President Clinton and asked him, “How did you lose so much weight?”

There’s a quiet, but giant revolution going on.

People are suddenly waking up to the giant dangers of cheap, fast food, Big Mac-style of eating. (If you missed last week’s article, The HIGH Cost of CHEAP Food, take a moment and read it now.)

Until recently, the idea of vegetarian no meat food was an all-or-nothing affair. But lately, the line between those who eat meat and those who don’t has blurred. “Meatless Mondays” at fancy restaurants are gaining serious traction. Big name chefs like Mario Batali from the Food Channel started offering meatless specials at his big-name restaurants in New York every Monday. Chef John Fraser of New York City’s Dovetail restaurant followed suit with a week-starting all-vegetable menu. And now its spreading to every city in the country. 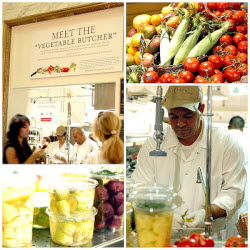 In Philadelphia, the famous Meritage Restaurant and Wine Bar prepares an elegant Tuesday-night vegan prix fixe. In California, in the heart of wine country, Cyrus Restaurant gives a multi course “Paeans to the Garden” that share equal billing with traditional tasting menus on a nightly basis.

And in Las Vegas, Wynn Resorts recently added vegan options at all the restaurants in its two casinos, even its ultra-fancy steakhouse, “SW”, where grilled royal trumpet mushrooms now have pride of place on the menu!

And if you want vegetables to cook at home, Mario has installed the Vegetable Butcher, where you’ll see giant tomatoes and pumpkins on display instead of butchered pigs and cows!

Eating in the Garden of Eden

This is not some New Age gimmick. Medieval European chefs developed all manner of meat substitutes for the fasting days of Lent, using ingredients like ground nuts, fruits, and breads shaped like animals.

With Thanksgiving and Christmas just around the corner, sales of Tofurkey, a savory vegetarian alternative from Turtle Island Foods are already starting their holiday climb. Tofurkey has a meat-like texture, is high in protein and has zero cholesterol. Try it this year instead of turkey!

Smart Dogs are a great tasting alternative to dangerous hot dogs. All kinds of great tasting substitutes exist today for chicken, veal, pork and even seafood. One of my favorites stores on the web is Veggie Brothers that delivers delicious vegetarian meals, already prepared, right to your door.

The faux meats of today, primarily from bases of mushroom, gluten, and soy, are predominantly creations of Chinese Buddhism. When I was in Taiwan, just about everyone was Buddhist and also, vegetarian to some degree or another and the country has become a mecca of faux meat innovation. Could this also be why clogged arteries and heart disease are practically unheard of compared to America?


Two things EVERY American can do right away

1. Get on the Clinton Diet and reduce your intake of all meat products – that includes beef, pork, chicken, turkey and even fish – and increase your intake of beans, vegetables and fruits.You’ll feel better, have more energy and might even drop a few pounds like President Clinton did.

2. And get our artery de-clogging formulas: Nattokinase Max and Ultra D3!

One Reply to “The Veggie Butcher & President Clinton”