Breaking News: A major study of the latest flu vaccine was concluded in China, where the Asian Flu is a major health calamity year after year, and the results are explosive!

It works with 99% effectiveness and no after effects, like the Flu Shot Study kids had.  It’s what I call, “God’s Vitamin” because of it’s amazing power that comes directly from God – the sunshine He sends every day that the body converts to Vitamin D3.

Our Ultra D3 formula is the most powerful vitamin D3 formula in the world.  Read on and I’ll explain to you exactly how and why  it works! 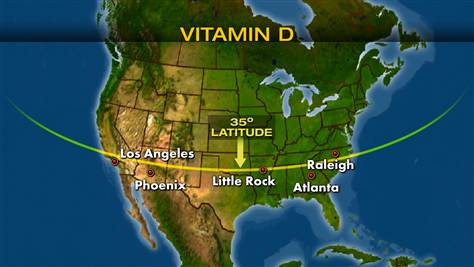 Where You Live Could Be Making You Sick!

If you live above the line on this map, you are in greater danger of contracting a cold or dangerous flu virus this winter.  Why?

You won’t be exposed to enough sunshine to fight it!

Vitamin D is the most important vitamin for our immune systems and it has been linked to far more than building strong bones and teeth – it can also protect us from high blood pressure, some forms of cancer, Hodgkins Lymphoma, and of course, influenza.

And the dangerous trend toward people staying inside watching TV, playing video games, surfing the web and applying sunscreen, is keeping them from benefiting from the best source of vitamin D available to us – the sun!

The unfortunate women receiving the placebo experienced more than 3x as many seasonal colds and flu as those who received 800 IU, but those who received 2,000 IU – they only had 1 case of flu during an entire year, and no winter flu at all!

The placebo group had 24 cases of flu in the winter and when compared to ZERO cases among the vitamin D group, it’s obvious how effective vitamin D is!

Based on this research, optimal vitamin D levels – right now – seem to be a much better alternative to preventing the flu than using an ineffective, expensive drug or vaccination with potentially disastrous side effects.

The Only Safe & Proven Way to Defeat the Flu

We have the most powerful vitamin D formula in the world called Ultra D3 – and recently we found a way to increase it’s potency, making it an even more extraordinary immune booster –  kicking your immune system in the highest gear to fight off any viral onslaught coming your way.

Next week, we’re going to go into all the amazing details about this FANTASTICAL formulation and why it works even better than ever!

Even if you’ve already been hit with a cold, or the dreaded flu, Ultra D3 will act like a ninja warrior and knock out the virus virtually overnight.

REMEMBER THIS: The flu vaccination doesn’t work.  You have to boost your D3 levels to optimum levels right now.

If you are still the fence about getting the vaccine, watch this truly remarkable video from Dr. Sherry Tenpenny, Vaccine’s Safety: A Crime Against Humanity. She will describe in detail what happens to the body when we force these toxins inside. After you watch it, forward it on to everyone you love.

Basics of the Human Immune System Prior to Introduction of Vaccines: Are Vaccines Turning Our Children’s Immune Systems Inside Out?