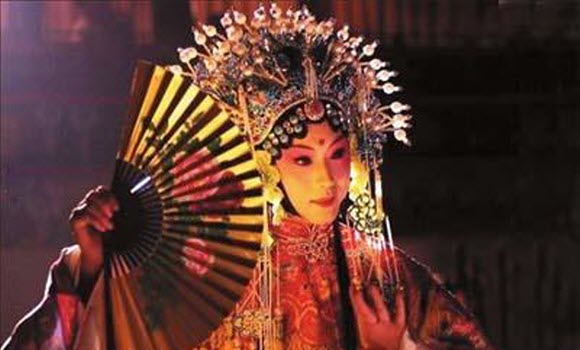 Luciano Pavarotti is said to have performed 250 times a year and never once lost his incredible voice. Colds, the flu, allergies, asthma, not even a hoarse throat, ever affected him. All opera singers can attest to this. Their lung capacity and health is not only inspirational in their performances, but a medical marvel.

Why then are so many people suffer from critical lung problems and difficulty breathing properly and fully? And always carrying a cold?

As usual, I discovered the secret in China, at the famed Shanghai Opera House no less! The next time you are in Beijing or Shanghai, get tickets to their Opera Company performances – they perform just about every night.

No doubt like me, you will be overwhelmed with the emotion, power, beauty and majesty of the event, particularly of the power of the tiny female singers. Many of these incredible women are in their 70’s and 80’s yet can still lift the roof with the power of their voices.

What do they do, to sing so strongly night after night I wondered, when most people I know can barely keep up with a simple 3-minute song at the local karaoke bar! Well, as usual, I dug into this to find what I think is the greatest lung health formula in the world.

If you get constant colds, or worse suffer from a respiratory impairment like emphysema or cystic fibrosis, pneumonia, asthma, bronchitis or allergies, your lung savior is at hand.

What If You Could Have a 3rd Lung?

First, some quick background. I am using Chinese Opera singer’s amazing lung capacity for a good reason. Chinese Opera together with Greek tragic-comedy and Sanskrit Opera are the oldest dramatic art forms in the entire world.

There is a gift here for you and your lungs. The history, makeup, music, costumes and of course, the voices of their opera stars is a incredibly powerful demonstration of the power of the voice. And of our lungs.

Along with Water and ionic Trace Minerals, Oxygen is necessary to create and sustain life. Miss any one of these and you’re dead. To the Chinese and the Sanskrit’s (Ayurvedics), this is the power of the universe itself.

In Chinese medicine, the Yin and Yang, the forces of the universe are always to be balanced. Our lungs provide the yin, the breath of life itself. And always to be nurtured.

So, after my visit to the famed Shanghai Opera House, more than 25 years ago now, I visited the herbalists at the equally famed Institute of Traditional Chinese Medicine and asked them what was it that these opera singers used to keep their lungs so strong for the nightly performances year after year?

Over to the big bell jars of herbs and sticks and stones they went, pulling out amazing things that we then slowly brewed into a dark, dark brown concoction for me to try.

As a former marathon runner, I wanted to see what effect this would have on me. Whatever it was that the herbalists brewed up for me, like the witch’s cauldron in Shakespeare’s Macbeth, it all worked. I was running like a gazelle, not even out of breath for ten miles at a time around the public gardens in old Shanghai. Even when I stopped, I wasn’t out of breath. It felt like I had a 3rd Lung!

This extraordinary formula has special meaning and significance to me. My beloved mother, who slaved every day to feed and educate my sister and I by cooking in a hotel and cleaning rooms, died of emphysema at a young age. She smoked and we did all that we could to get her to stop, but to no avail.

This formula might very well have saved her. It certainly would have extended her life, so we could have enjoyed her love and laughter, longer.

In all my years in China, not once did I catch a cold or the flu.

With the harsh cold winter months approaching, this is one formula everyone should take to boost their lung health now, instead of waiting. Keep a diary or notebook of your lung’s reaction to taking it. You’ll be singing in the opera in no time at all. (Even if it’s just in the shower…)

Available in capsule form instead of a murky tea from the kettles!

Serving Size: 2 Capsules
Servings per Container: 60
Suggested Use: As a dietary supplement, take 2 capsules daily with water or as directed by your healthcare professional.

Respiratory Support is the best thing that could’ve ever happened to me regarding allergies. I bypass the allergy season altogether as if I had never suffered from the extreme shortness of breath and horrific coughing. I don’t know how I would survive the spring without it!
Daniela, CA

Respiratory is a lifesaver! In 2 of the past 4 years, I was hospitalized for pneumonia after catching a common cold. My lungs became so congested, I would wheeze trying to get a breath. My oxygen levels dropped to the low 80’s.

When I heard Wayne Garland talk about Respiratory and that it was like having a “3rd Lung”, I had to try it, as it was November and I felt the start of a cold coming on, and was wheezing again.

In just a few hours, I could breathe easily again. I couldn’t believe it! None of the drugs prescribed had worked for me. I’ve been taking it daily for 2 months now and not a single incident of lung congestion!
Aaron, CA

I take Respiratory faithfully for a couple of years and watch everyone around me get colds and such, and not me! I think it’s made a huge difference. I have a couple of people I’ve referred it to and they love it as well.
Carrie, IN

I am a faithful believer in the Respiratory Support formula!!
My son was in the ER 4 times in 2 months at the age of 2 with respiratory issues. My first instinct was to contact Wayne Garland. Thank goodness I did because my son’s pediatrician wanted him on inhalation steroids daily for an undetermined length of time. At 2 years old???!!! It was basically just a terrible band-aid over a much bigger issue.

Wayne Garland worked with us consistently to help my son overcome his respiratory weakness and to build his body’s ability to heal itself.

Now 4 years old, my son has never been on any daily steroids for his breathing and is as active and playful as any other child his age! Actually, I’m certain he’s got even more energy because of the vitality of his body!

As a mother I am grateful every day that Wayne Garland was able to step in and offer a healing alternative to my other options. I know he has made an incredible difference in the life my son has led since he’s been taking his formulas!! Our entire family is grateful as you have something for each of us!! Thanks to everyone involved, we love you!
Jennifer, AZ

If anyone you know has a dangerous lung condition, contact our Customer Support team to schedule a private consultation.

God be with you at all times.