It’s not enough to be “aware” anymore! You have to take action – and I don’t mean the kind of “action” that Angelina Jolie took – removing both of her breasts in an attempt to keep from getting breast cancer.  It’s completely unnecessary and frightfully invasive!

Don’t be fooled! You can avoid breast cancer in your lifetime.  Let me say that again!

You can avoid breast cancer in your lifetime!

Today’s newsletter includes two women’s stories, and how they dealt with breast cancer very contrary to our philosophy.

Both needed to be told the truth about breast cancer:  You can avoid it without a double mastectomy, and you should not panic if you get this diagnosis.

We will be doing a 2-part series this month, in honor of Breast Cancer Awareness. We will definitely be taking a different approach from what you are accustomed to hearing.

Next week we will get into the specifics of the hope that you can have, both in avoiding breast cancer, or dealing with it in ways that will help to keep your body strong, while fighting off this disease.

Read on to hear the stories from these two women. Please share this information with as many people as you can. It may well save their lives.

You’ve may remember reading in 2013 that Angelina Jolie in 2013 voluntarily had surgery to remove her breasts and ovaries, after losing her mother to ovarian cancer and chemotherapy treatment, because Angelina inherited a damaged copy of the BRCA1 gene, which may increase her risk of ending up with breast or ovarian cancer herself.

The reality is that a double mastectomy is worth $50,000 in the coffers of traditional healthcare providers.

Jolie, like many women, had been terrified into a state of total obedience to the cancer industry. She has been lied to and told this BRCA1 gene gives her an “87% chance of breast cancer”.

It’s a complete lie. Cancer is never a matter of “chance” or “luck.”

It’s a matter of cause and effect. You must look at the root source of cancer: food and lifestyle.

We’ve been screaming from the rooftops that you can “Cancer-Proof Your Body” by adopting a plant-based diet along with taking immune system and hormonal balancing supplements.

If Angelina had followed this course, she would have never chosen a double mastectomy as a “preventative” operation and the pain of reconstruction that went with it.

Click here to learn more about Mastectomies and the Medical Industry.

“It is with tremendous sadness that we announce the death of our beautiful, dynamic and one of a kind mother, Jackie Collins, who died of breast cancer today.”

This was the announcement of the death of the beloved novelist. She suffered with this disease for nearly 7 years and never told anyone except her children.

She ignored the lump in her breast stating, “I’m not dealing with this, because in my mind I decided it was benign”. Even though her own mother had died of breast cancer, Collins did not seek treatment until she found herself limping on a book tour. The cancer in her breast had now spread to her bones.

We can all learn from her example. Don’t allow fear to cause us to not react to our body’s signals. Don’t bury your head in the sand and ignore symptoms that could potentially lead to death.

Have You Been a Victim of “Medical Blackmail”?

We have heard from clients who tell us that they have been “blackmailed” by their traditional physicians when they tell them they are going to seek alternative therapies – sad but true. 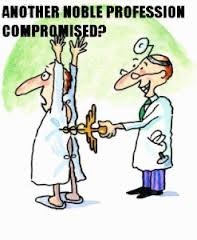 One patient was told by her reconstructive surgeon, that if she tried to support her chemotherapy and radiation treatments with immune supporting supplementation he would, “not do her breast reconstruction surgery”. She was terrified to be left with the deep recesses in her chest, that she gave in to his demands and went without!

It’s this type of behavior that influences cancer patients to make rash decisions that could impact their lives.

We are in a time when doctors are instilling more fear than hope. Until men and women quit falling prey to “scare tactic” medicine, they will continue to accept unnecessary and sometimes life-threatening treatment.

Every person should take the time to evaluate the pros and cons of the treatment choices they are considering, so that they can make an intelligent, informed decision. Don’t allow fear to motivate your decision-making process.

Last year, nearly 2 million women (and men) were diagnosed with breast cancer, and if something doesn’t change, 13 million lives will be lost to this epidemic in the next 25 years.

Traditional medicine’s path of lumpectomy, mastectomy, chemotherapy and radiation is meant to prolong life. It does little, if anything, to eradicate the actual underlying issue – the cancer itself.

Once patients are convinced to do surgery, then the follow-up treatment begins. This can include hormone suppressing prescriptions that can cause side-effects, as well as chemotherapy, which is the obvious next step considered necessity in the mainstream medical community.

This video should be a wake up call for everyone who receives a cancer diagnosis. We are taught that chemotherapy MUST be done, if you want to combat this disease. Well, you’re about to find out the truth behind the push for chemotherapy.