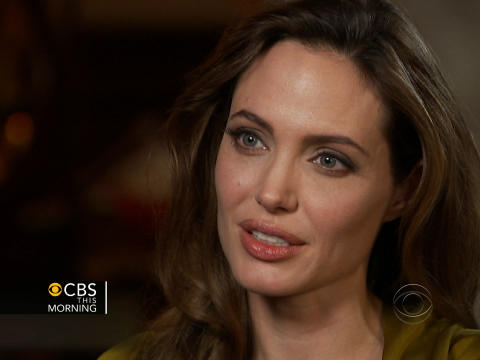 “I think scars are sexy because they mean that you made a mistake that led to a mess.”

As you are obviously aware from the screaming headlines and talking heads on Hollywood gossip TV shows, Brad Pitt’s wife actress Angelina Jolie just had a double mastectomy to remove both her breasts because she was terrified of possibly getting breast cancer.

As the medical authorities tell us that 90% of all men will suffer or “get” prostate cancer in their lifetime, will Mr Pitt follow in his wife’s footsteps and self-castrate himself so as not to get cancer?

This is all lunacy, you know.

Jolie, like many women, has been terrified into a state of total obedience to the cancer industry.

She carries the BRCA1 gene, and she has been lied to and told this gene gives her an “87% chance of breast cancer”.

It’s a complete lie, of course: Cancer is never a matter of “chance” or “luck.”

It’s a matter of cause and effect. Genes can be turned on or off by food, two simple nutritional supplements and lifestyle choices.

I’ve preached for years, screaming from the rooftops that you can “Cancer-Proof your body” by adopting a plant-based diet, including zero dairy product ingestion, eliminating all red meat, pork and chicken consumption, walking for 45 minutes every day and taking six immune system and hormonal supplements..

Obviously, Ms, Jolie and Mr. Pitt did not hear me, or worse, did not heed my words.

Instead, Ms. Jolie has written an impassioned “Opinion Piece” published in the prestigious New York Times explaining her actions.

I nearly threw up when I read it.

Not for her love of self-mutilation, but for what all this will do to so many wonderful young women out there who “look up” to Ms. Jolie as a role model and admire her film and charity work, saving innocent children from orphanages around the world, which is certainly to be admired.

Jolie’s piece in the New York Times cited risk numbers as key to her decision. She said that doctors told her she had an “87% risk of breast cancer.” Her solution? Undergo three months of surgical procedures and have her breasts cut out.

But the really sad (as if there could be anything sadder about this story) part about all this is that Angelina Jolie was lied to. She didn’t have an 87% risk of breast cancer in the first place. All the women reading her NYT op-ed piece are also being lied to. Here’s why.

Even Jolie, with her BRCA1 gene that’s linked to breast cancer can quite easily follow a dietary and lifestyle plan suppressing BRCA1 gene expression. It’s not rocket science. It’s not even difficult. It can be done with simple foods that cost a few dollars a day. Those foods include raw citrus, resveratrol (red grapes or red wine), raw cruciferous vegetables, omega-3 oils and a super antioxidant called “curcuminoid”. These same foods also help to prevent heart disease, diabetes, Alzheimer’s and other chronic diseases.

On July 12, 2007, a study of 2,514 breast cancer victims published in the New England Journal of Medicine (the “Holy Grail” of all medicine and research) showed zero correlation – let me repeat that:  ZERO CORRELATION – between the BRCA gene and breast cancer.)

Dr Gad Rennert, M.D. and his team of scientists concluded:

“Breast Cancer-specific rates of death among Israeli women are similar for carriers of a BRCA founder mutation and non-carriers.”

There IS NO BRCA horror gene out there at all!  The body handles them all with it’s immune system capacities!  Trust it!

During the latter part of the 19th century and the early part of the 20th, a French physician named Antoine Bechamp, struggled with a French bureaucrat named Louis Pasteur regarding the fork in the road medical philosophy and the route future patient treatment were about to take.

Bechamp argued the cause and cure for most disease was in us all, and by properly caring for one’s body was the best preventive medicine. Pasteur argued that germs were all around us, and the cures could best be found in vaccines, butcher block intervention surgery, and pharmaceuticals.

I don’t have to tell you whose approach gained the greatest acceptance.

Modern medicine has become a gigantic money trap that even the most well-intentioned doctors, pharmacists and health care professionals are seduced by.

I preach the Bechamp philosophy, summed up by my life motto: “BODY AS DOCTOR”.

God didn’t send any of us here unprepared or with “good luck” or “bad luck”.

Your body is DESIGNED BY GOD, the greatest engineer of life in all history, to prevent disease, heal itself and give you the long life you deserve, FREE OF DISEASE and medical butchery. 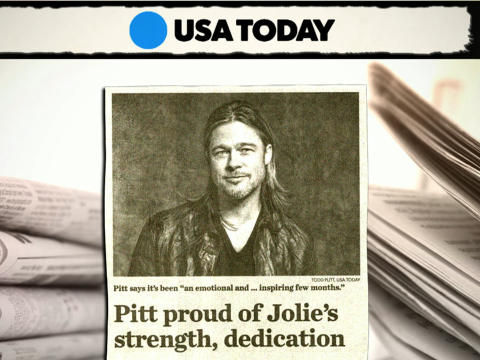 I can just see the doctors at that flashy Beverly Hills medical clinic rubbing their hands in glee when their new “Million Dollar Baby” pulled up to their front door and was ushered in.

Not once in Ms. Jolie’s impassioned Opinion Piece did she talk about getting a 2nd opinion, or even a 3rd one. Nor did she seek out nutritional researchers, like your humble servant, to learn what foods to consume that lead you away from the plight of Cancer and indeed defeat it, just by eating some fresh, raw and rare foods instead of junk food garbage, milk,cheese, pizzas and Big Macs.

All this is wonderful “stuff” for Hollywood of course.

I can see a movie in the making, can’t you?

It will star Brad Pitt, of course, walking dutifully behind his heroic wife with a big black cloud hovering over them with the words BRCA written across it.

Balanced Woman is an all-natural formulation using ancient adaptogenic herbs from the East in combination with vitamins, minerals and plant substances to help promote hormonal production and emotional support from puberty onwards through a woman’s lifetime, including peri- and post-menopause.

DIM comes from plant indoles found in cruciferous vegetables Broccoli, Cabbage, Kale, Brussel Sprouts, Caulifower and Leeks, that aids in balancing estrogen metabolism and can help to maintain a healthy hormonal balance for both men and women.

WARNING: Women who are pregnant, planning to get pregnant or nursing should not take DIM.

Long used by the Indians in Ayurvedic medicine (and commonly known as the fabulous yellow spice in curry dishes) the turmeric root contains compounds that have remarkable qualities as a free radical fighter (antioxidant) and anti-inflammatory.

Modern scientific research now shows these compounds, called Curcuminoids, have dramatic benefit in reversing Alzheimer’s by helping the immune system clear away plaque from Beta-Amyoid deposits in the brain, restoring clarity in thinking. Curcuminoids also have been shown to stop cancer cells from reproducing (called apoptosis) by blocking a key biological pathway cancer needed for development of melanoma and other cancers.

This formula is without a doubt the most powerful and synergistic Vitamin D formulation available, combining 5000 iu’s of vitamin D with 55 mcg’s of vitamin K2 MK-7, along with co-factors Magnesium, Boron, Zinc, trace minerals and vitamins C, E and Beta Carotene, the precursor to vitamin A, to deliver synergistic benefits ranging from building strong bones, improving cardiovascular health and antioxidant protection.


The China Study: The Most Comprehensive Study of Nutrition Ever Conducted and the Startling Implications for Diet, Weight Loss and Long-term Health by T. Colin Campbell

The No-Dairy Breast Cancer Prevention Program: How One Scientist’s Discovery Helped Her Defeat Her Cancer by Jane Plant

6 Replies to “Should Brad Pitt now castrate himself in an act of Self-Butchery?”