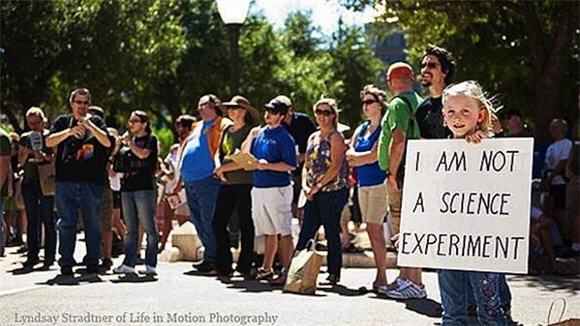 “Genetic engineering companies want to create a situation where you have to get permission from a corporation to eat.“
Jerry Brown, Governor of the State of California

The Dangers of GMOs

Experts say that 85% of corn and up to 90% of soybeans are genetically engineered. At least 70% of processed foods on supermarket shelves in America have genetically modified ingredients.

Genetically Modified Organisms (GMOs) are being introduced in our food supply without our knowledge or our consent.

Many other countries have banned or restricted the import, distribution, sale and commercial planting of GMO seeds, including China, Japan and the EU because of the lack of testing done on humans.

The testing on animals has brought horrifying results: animals refuse to eat GMO feed, and upon being force-fed, developed lesions, abnormalities and deadly diseases. The poor animals couldn’t fight back.

In the United States, manufacturers are not even required to identify or declare on the label that genetically modified ingredients are being used in food or body products.

These products NEED to be labeled for our basic safety!

The Origin of the GMO Labeling Debate

The beginnings of GMO labeling battle began in Europe. The EU’s regulatory policy on the genetic engineering of food evolved from a basic premise known as the “Precautionary Principle.”

“if an action or policy has a suspected risk of causing harm to the public or to the environment, in the absence of scientific consensus that the action or policy is harmful, the burden of proof that it is not harmful falls on those taking the action.”

The Precautionary Principle was the guiding philosophy of many U.S. regulations between the late 1960s and mid 1980s. It was even written into the founding directives of the Environmental Protection Agency (EPA).

Why the U.S. abandoned the Precautionary Principle is a very complicated story, starring Ronald Reagan as the deregulator, but more important to the GMO issue is this question: why did the EU change course and adopt the precautionary principle as its regulatory philosophy in the 1990s?

It was the incredibly poor handling of the Mad Cow outbreak in Britain that turned the tide and ushered in the age of the precautionary principle in Europe.

For years after the first cases of Mad Cow Disease were discovered in England, EU authorities assured the public that humans were safe because they could not contract the disease that was destroying European herds.

The EU continued to allow infected British cattle to be exported, and tragedy struck. Ten confirmed cases of Creutzfeld-Jakob Disease, a terrible brain ailment similar to Alzheimer’s, were linked to eating BSE-tainted beef.

The EU regulatory agencies charged with protecting the public’s health and food supply had been dead wrong or covering up the truth for years. They lost all credibility.

At the same time Mad Cow Disease and the government’s complete incompetence in handling the crisis were beginning to permeate the European consciousness, the United States was making its first shipments of GMO crops and seed into EU countries.

The timing couldn’t have been worse.

Europeans view food production as a natural, rather than an industrial process, a perspective that was already making them skeptical of genetically engineered foods. But their food-safety awareness was honed to a razor’s edge thanks to the Mad Cow debacle.

As a result, Europeans quickly became terrified and outraged, believing that GMOs could well be the next source of food-derived illness that regulators would be too incompetent to prevent.

So despite assurances from the U.S. government that GMO corn, wheat and soy were safe, citizens all across the EU demanded that GMOs be either outlawed altogether, or at least labeled properly in all food products containing them so that consumers could retain their right to choose whether or not to eat them.

As a result, even though more than 80% of European farmers say they would prefer to grow GMO crops, which offer larger yields and more profits, they instead grow non-GMO crops because there is virtually no market for GMOs as a result of labeling.

The Debate Comes to the States

Just last month, a petition in California for the GMO Labeling Initiative received nearly a million signatures – nearly twice the number required! That means it will be on the November 2012 ballot, and things look good for the initiative to pass. A recent poll on the issue conducted by Mellman Group found that 91 percent of Americans support the labeling of GMOs in food products.

California isn’t just another state – it’s the most populous state in the nation, with 38 million people that consume more than 12% of all food products in the entire country.

This means that labeling GMO products may well occur on a national or even a global level due to the California vote. And if that happens, U.S. citizens will most likely follow the same choice patterns as their European counterparts.

The market, not the law, will transform fields once seeded with GMO plants into non-GMO farms that grow healthy, real foods. Regardless of the desire of most U.S. farmers to grow GMO crops like their peers in the EU, they will have little choice but to return to natural crops because there will be very few buyers for GMOs.

So while the exact future of GMOs may be unclear, one thing’s for sure: November will be heralding some major changes for the United States, and potentially for the entire world, when it comes to GMOs.

I am committed to joining with you in ending this corporate food fight and standing with Organic Farmers to provide the healthiest, best tasting and affordable NON-GMO food available – not just for us, but for our children and our children’s children.

As my personal gift to you for standing with me for GMO labeling, I’m offering you a free copy of two of my books:

Let’s link arms and stand strong against the insidious corporations and their GMOs.