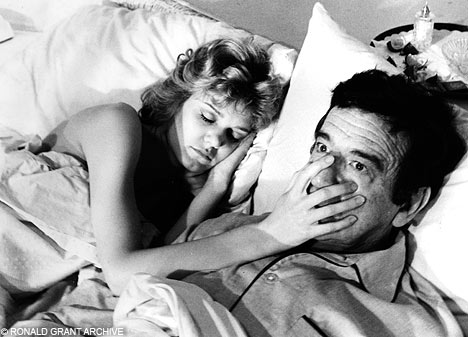 Did you know 50 million Americans suffer with snoring and its partner, sleep apnea. According to shocking new research, snoring and apnea are associated with up to 90% of all known diseases and chronic conditions.

Snoring and Apnea have been linked to CANCER in a University of Wisconsin School of Medicine and Public Health study. Dr. Javier Nieto found that participants with the most severe sleep disordered breathing were 5 times more likely to die of cancer than those with normal breathing!

Are you snoring and sick all the time? Read on to find out how to STOP snoring and live longer.

Did you catch the ABC News and Fox News special reports recently explaining the link between cancer and sleep disordered breathing (the medical term for snoring and sleep apnea) where oxygen flow is significantly reduced or even cut off, while sleeping.

The news reports came about from two new studies following 1,500 people in America and more than 5,000 in Spain, were presented at an international conference just a few weeks ago. In both studies, researchers ruled out the possibility that the usual risk factors for cancer such as age, smoking, alcohol use, physical activity and weight played a role in the results.

Dr. Javier Nieto of University of Wisconsin School of Medicine and Public Health found that individuals with the most severe cases were 5 times more likely to die of cancer than those with normal breathing!

In the Spanish study, Dr. Miguel Angel Martinez-Garcia of La Fe University and Polytechnic Hospital found a 68% greater likelihood of developing cancer in test subjects whose oxygen levels dropped below 90 percent compared with those whose oxygen levels did not plummet.

Please take a moment right now to watch the videos.

Who Knew Snoring was so Dangerous to our Health?

We all know someone who snores or has sleep apnea. The most common treatment prescribed by doctors today is a CPAP mask that you wear over your face at night that delivers constant pressure and flow of air all night long to keep your airway open.

I don’t know about you, but I would not want to wear one! I don’t think I could sleep a wink with a contraption like that on my face.

Instead, I would turn to Mother Nature and her cupboard for a natural solution to address the problem, not just treat the symptom.

Stop Snoring provides you with an array of super-powerful ingredients working together to bring deep, silent and oxygenated sleep: