One of the most tragic occurrences in our society over the past 20 years, has been the epidemic of Attention Deficit Disorder (ADD). And the related epidemic of Autism. Our children are mentally non-functional.

And the drug-doctor’s answer is what? Another drug, Ritalin, which turns children into zombies and teaches them to be drug addicts while they are young. There is another answer.

Kids everywhere have played “Simon Says” for generations, without the slightest inkling that such games may be preparing them for great success in the classroom and the work-world later on.

Psychology researchers tell us that the “Simon Says’ game is one of the most important “mind game-exercises” that draws on the crucial capacity to restrain impulses and exert self-control. 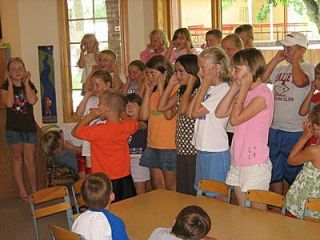 Until recently, many experts believed that teachers could do little to foster these skills in our children, thinking that kids would either develop the knack over time, or require medication such as Ritalin to correct attention disorders.

But new research suggests that ordinary children can benefit from “mind play” that gives a mental workout to their faculties of “executive control,”
as psychologists call it.

One study  found that preschool-age kids who spent most of their school hours playing games designed to improve self-control scored far better than other kids on a range of tests that measure executive function.

Other work has shown that measures of executive control can predict future success in school at least as well as IQ tests, which gauge only a limited range of mental abilities.

Improving executive function could be a promising way of getting children ready for the real world, says Adel Diamond, a co-author of the study that appeared in the journal, “Science.”

Scientists believe executive control comes from an area of the brain called “the prefrontal cortex” which underlies much of our ability to make conscious, deliberate choices. It’s also one of the last brain areas to reach maturity in children, and that shows in the often impulsive behavior of young children.

When young children see someone else with a toy they want, they simply take it. When they want food, they grab it. Executive control includes the power to think twice and avoid such mental missteps.

Many researchers believe another key aspect of executive function is what’s called “working memory,” the small store of memory that people keep in mind while doing a task such as solving a math problem or spelling a word. Improving “working memory”also could aid self-control.

Working memory is important for executive function because you have to keep something in mind while ignoring various distractions in the environment. This latest research suggest that schools can teach young children better executive control, just as they now teach skills in math and reading.

Researchers had teachers of low-income children use a curriculum called “Tools of the Mind,” which emphasizes having children do planned imaginative play in which they act out specific roles for an extended period. The theory is, that such play helps children develop executive control by forcing them to inhibit actions that are inconsistent with their role, and to stick with the plan instead of simply reaching for an alluring toy.

Teachers also focused on activities that forced children to take turns rather than have someone else tell them what to do.

Parents can help children develop many such executive functions at home.

Read to children without showing them the pictures, this technique makes kids use working memory to follow along with the story rather than using the pictures as a crutch.

Games such as “Simon Says” and “Red Light, Green Light”, also help tremendously in helping children learn to be guided by their choices rather than their instincts.

Mother Nature can also be a giant help. Get all children off Dairy! No more milk, chocolate milk at school, ice cream and butter. Switch your kids to organic soy milk or rice milk or cashew/almond milk.

Email me for my nutritious, all-natural Chocolate Almond Milk recipe. Instead of sugar, it uses Agave for sweetener. Kids love it and so will you. Freeze it for “ice cream” and you’ll never buy the dairy version again.

Want to know the truths about milk and why it is mental poison. Go to www.NotMilk.com to read the facts about dairy consumption. Same too for drinks containing High Fructose Corn Syrup. And those that contain NutraSweet or Aspartame, the deadly artificial sweetener. These are all brain No No’s.

I also have had great results with the following formulas:

DMG Vitamin B-15 – The secret mental fuel from Russia. Crucial in treating Autism and ADD.

L-Glutamine Formula – One of my autistic patients calls this “Brain Candy”.

And my Miracle Potassium Broth each day or two works wonders on the brain. Make it yourself for pennies a bowl.

Act now to save our children.

One Reply to “Ritalin is Rubbish”