President Barack Obama this past weekend declared the swine flu outbreak a National Emergency, to cope with any surge of patients, the White House says. The declaration Saturday increased concerns, and panicky reactions, to a disease now affecting nearly every nook and cranny of the world.

Then today came a bolt from out-of-the-blue. Robert Gibbs, the White House Press Secretary, said Obama’s daughters will not receive the vaccine based on their profile.   Apparently, according to him,

…only children with an impaired immune system are supposed to take the vaccine.

I don’t think this is what the media is reporting …

In my office, I have been told by parent after parent that local health officials are coming into the elementary schools next week to administer the H1N1 vaccine to all of the school children. Now, it is obvious we need to protect our children – and ourselves. In last Friday’s health alert, Swine Flu Spreading from Schools, schools are a breeding ground for H1N1.

But forced vaccination is not the right way to go about providing that protection. I think the risks far outweigh the “supposed” benefits. If you missed our video report on Desiree Jennings, a vibrant 26 year old who got a flu shot in August and is now neurologically impaired, you must watch it: Woman Neurologically Disabled by Flu Shot.

It Gets Stranger by the Day

H1N1 is supposedly a Phase 6 pandemic, characterized by wide-spead infection at the community level, not a virus that only attacks susceptible children.

According to the World Health Organization in their Global Alert and Response for Antiviral Drugs and Pandemic (H1N1) 2009 regarding the use of antiviral drugs and H1N1:

Almost half of the reported cases of oseltamivir (an antiviral drug) resistant virus have occurred in patients taking oseltamivir for prophylaxis. (A prophylactic is a medication or a treatment used to prevent a disease from occurring.)

For people who have had exposure to an infected person and are at a higher risk of developing severe or complicated illness, an alternative option is close monitoring for symptoms, followed by prompt early antiviral treatment should symptoms develop.

Then why do I keep hearing doctors on all the news channels recommending children receive a flu shot for prevention? Am I missing something here?

Every time I drive by the local drugstore and supermarket, there is a sign out front, “Get your flu shot – $25!”

What the Science says about Mercury 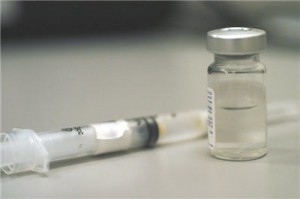 Thimerosal is a dangerous, mercury-containing compound used as a preservative in flu vaccines. The standard counterclaim from the medical industry and the bobble-heads on TV is that these ingredients, in the doses administered, have never been proven detrimental to human health.

This is a bold faced lie. Where did the gigantic Autism epidemic come from then? But it’s an effective lie, because most people will simply take that statement at face value without doing any further research. Life is far too busy to double check “reliable” sources.

The fact is, there’s plenty of evidence indicating that significant brain damage can occur as a result of being exposed to agents such as Mercury and Aluminum, both for children and adults. In fact, some researchers believe that Aluminum may be an even more important toxin than Mercury in the vaccines.

For example, in a new study published in the journal NeuroToxicology just last month, researchers found that primates injected with just ONE vaccine containing Thimerosal suffered significant neurological impairment when compared with those who received a saline solution injection, or no injection at all.

The monkeys received a weight-adjusted amount of the vaccine preservative Thimerosal, so each dose included 2 mcg’s of Ethyl Mercury. A human infant dose of Thimerosal-containing vaccine typically contains 12.5 mcg, and most seasonal flu vaccines, as well as the swine flu vaccine, will contain 25 mcg of Mercury per adult dose.

As a result, the macaques primates vaccinated at birth took more than twice as long as unexposed macaques, to acquire three standardized skills typically used to measure infant brain development.

Despite the overwhelming evidence that has built up over the years, US health officials are still promulgating vaccines as the best solution to the flu.

Worse yet, in a nauseating twist, the State of Washington’s Health Department has now temporarily suspended a rule that limits the amount of a Mercury preservative in vaccines given to pregnant women, and children under the age of 3, just so that they can start administering the swine flu vaccine to toddlers and pregnant women as quickly as possible.

According to the World Health Organization, the swine flu has claimed nearly 5,000 lives globally.  U.S. officials say swine flu is responsible for more than 1,000 Americans deaths. No wonder the President declared an emergency! 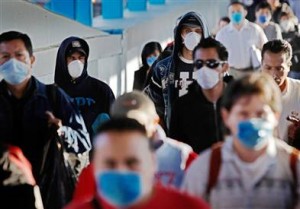 One-half of our town here in Arkansas has shut down because of it and kids are staying home from school. In Arkansas alone we have had eleven deaths, most of them young children, and just today a 12 year old girl near us died.

Flu activity – virtually all of it the swine flu as it is too early for the seasonal flu – is now widespread in 49 states, a level equaling the peak of a typical winter flu season. Amid growing fears, traditional Halloween parties, school events and birthday parties have been canceled.

The fact is for most people, the flu – no matter what type of flu it is – doesn’t pose a serious life-threatening danger, IF (and that’s a big “IF”) we all take solid precautionary action with basic hygiene and strong flu-fighting natural compounds.

Colds and flu are what doctors like to refer to as “self-limited” illness.  What this means is you feel sick for awhile, but eventually get better on your own. There’s absolutely no point in visiting the doctor, as more likely than not, they will just going to prescribe an antibiotic. This is just plain DUMB!

Antibiotics don’t work on flu because the flu is caused by a virus. The anti-viral medication being recommended, Tamiflu, isn’t usually necessary to recover and has very dangerous side effects as well. (More on this in our next Health Alert.)

Those of us caring for older adults feel particularly worried, because seniors are generally at high risk for getting very sick from seasonal influenza.

The H1N1 strain is a little different in this respect, as adults over 60 appear to be more protected from it, as their immune systems have already fought a million battles, making them tougher to knock over, unlike a young child or adolescent. Still, when older adults get sick, we need to watch them carefully to make sure it’s not developing into something more serious.

If you have any of these symptoms, don’t wait it out, because once pneumonia or other serious infection sets in, things can move quickly. That’s when it becomes an EMERGENCY and you need EMERGENCY ACTION!
If you have any doubt whether you need medical care, call your doctor’s office IMMEDIATELY.

Dr. Garland’s Emergency Actions to Follow if You Get Swine Flu:

Special Note about Children and Vitamin D: Up to 5 years of age, children should take half dosage.  Ages 6 and up can take the full dosage, there are NO toxicity problems with Vitamin D-3 at this intake level.

Be prepared to repeat this program if the flu comes back, because if it does return, it comes back with a vengeance.

Whatever you do, DON’T GET A DANGEROUS VACCINE SHOT. Follow the First Lady’s lead on this!

Instead, protect yourself and your family by taking our incredible Swine Flu Prevention Kit containing the four vital formulas to build your immune system so strong, the swine flu can’t take hold. The kit is wholesale priced at $69.99, an extra 20% discount off Preferred Member pricing, to make it affordable for everyone.