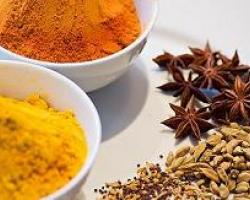 A new study shows that Curcumin, a popular Asian spice from the turmeric root, might protect women from breast cancer who are taking estrogen and progestin (synthetic progesterone) used as hormone replacement therapy following menopause.

Previous studies found that postmenopausal women who have taken a combined estrogen and progestin hormone replacement therapy have increased their risk of developing progestin-accelerated breast tumors. Now, University of Missouri researchers have found that curcumin, a popular Indian spice derived from the turmeric root, could reduce the cancer risk for women after exposure to hormone replacement therapy.

“Approximately 6 million women in the United States use hormone replacement therapy to treat the symptoms of menopause,” said Salman Hyder, the Zalk Endowed Professorship in Tumor Angiogenesis and professor of biomedical sciences in the College of Veterinary Medicine and the Dalton Cardiovascular Research Center. “This exposure to progestin will predispose a large number of post-menopausal women to future development of breast cancer. The results of our study show that women could potentially take curcumin to protect themselves from developing progestin-accelerated tumors.”

In the study, researchers found that curcumin delayed the first appearance, decreased incidence and reduced multiplicity of progestin-accelerated tumors in an animal model. Curcumin also prevented the appearance of gross morphological abnormalities in the mammary glands. In previous studies, MU researchers showed that progestin accelerated the development of certain tumors by increasing production of a molecule called VEGF that helps supply blood to the tumor. By blocking the production of VEGF, researchers could potentially reduce the proliferation of breast cancer cells. Curcumin inhibits progestin-induced VEGF secretion from breast cancer cells, Hyder said.

The study,  Curcumin delays development of MPA-accelerated DMBA-induced mammary tumors, has been accepted for publication in Menopause, a journal of the North American Menopause Society.  The study is coauthored by Hyder; Candace Carroll, graduate student of biomedical sciences; Cynthia Besch-Williford, associate professor of veterinary pathobiology in the MU College of Veterinary Medicine; and Mark Ellersieck, professor and researcher in the MU Experiment Station Statistics.

Is Curcumin the Super Underground Nutrient of the Century?

I can barely contain my enthusiasm for the use of Curcumin for fighting cancer, Alzheimer’s and premature aging.

It was a staple of the diet at all the healing “ashrams” I stayed at 22 years ago. Now the penny is finally dropping here in the West about its protective powers. Even M.D. Anderson Cancer Center, the famed hospital and research institute, is excited about curcumin and its anti-cancer abilities.

Our Super Curcumin C3 formula is a special, patented version containing a unique combination of curcumins.  We also incorporate Bioperene, a natural extract of black pepper that increases assimilation.

It is vital that if you want the total benefits of curcuminoids in fighting and preventing cancer, you should totally avoid HRT drugs. Instead, use our Balanced Woman 40-Plus, a thousand year old chinese formula that naturally regulates hormones a woman needs, not stimulated by dangerous drugs.