Do you know there are over 300 “types” of arthritic pain? It’s an epidemic, with one out of two people experiencing severe arthritis pain in their lifetime.

More than twenty years ago now, while studying Arthritis in all its various forms, I heard about the work of a doctor at a clinic in California by the name of Dr. Robert Bingham, who felt that all forms of arthritis started with poor nutrition.

It was Dr. Bingham who first sold me on the power of magnesium to the body. He felt that the medical world and the media were overselling calcium, when magnesium was the mineral the body really needed more of. He was also the first to passionately advocate high levels of daily sunshine for vitamin D production in the body.

Oh, how times have changed! Magnesium is now at the forefront of all bone science and vitamin D is being hailed as the “Miracle Sunshine Vitamin”, as nearly all chronic diseases are associated with vitamin D deficiency.

Imagine if you had all of this Arthritis wisdom available to you every second of every day? Without having to leave your home or desk? Imagine no more, we have it.

Read on to discover how you can rid yourself of arthritic pain once and for all.

How Do We Get Arthritis?

There are 3 “types” of Arthritis that are typically experienced by most people:

1. Osteoarthritis – a progressive disease that comes with aging. It can begin at the sight of previous injury. In some cases, arthritis, known as “Reactive Arthritis” can be brought on by other causes, including:

2. Rheumatoid Arthritis – (RA) is the second most common type of arthritis. It is in fact a type of autoimmune disease in which the body attacks tissues in the joints.

If you have another autoimmune disease, such as Lupus, Hashimoto’s disease, or Multiple Sclerosis, you are at a high risk to develop RA.

Autoimmune disorders cause a response in immune cells to attack connective tissues, even in the major organs of the body. This attacks the lining of the joints, which leads to Rheumatoid Arthritis. Nearly 1.5 million people now have RA.

3. Gout – The third most common type of arthritis is gout, a condition caused by uric acid deposits in the joints. This crystallization makes it difficult for bones to move, and is extremely painful, even for the affected area to be touched!

The Arthritis Foundation estimates that four percent of American adults develop gout, primarily in their middle ages. Gout is attributed to an increase of uric acid in the blood often contributed by dietary factors. Obesity-related conditions can also increase your risk for high uric acid and gout. Signs of gout start in the toes, but may spread to other joints in the body.

Foods to Eat to Beat Inflammation

What you eat – or don’t eat – can make a difference. Here are some foods to think twice about, as they could provoke inflammation, while others could help relieve arthritis pain. Click Here for the 14 Best Foods for Rheumatoid Arthritis Relief! 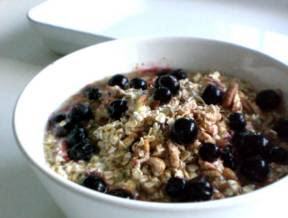 I don’t know anyone who doesn’t love blueberries! If you can find them growing wild in the forest, even better! This recipe is more like granola, as Muesli is traditionally soaked in liquid (milk or water) overnight.

Directions
1. Preheat oven to 325°F.
2. Mix oats, maple syrup, and cinnamon in a bowl.
3. Spread mixture evenly onto a non-stick baking tray.
4. Toast oat mixture in preheated oven for about 10-15 minutes, stirring occasionally. Watch mixture very closely when toasting to not burn.
5. Remove from oven and let cool. Pour into a large bowl and stir in chopped walnuts and dried apples.
6. Divide mixture into serving bowls and top with blueberries. Serve with apple juice.

Did you know?
Eating blueberries with dairy milk has been shown to block their antioxidant capacity, which is why this is served with apple juice or water instead of milk. (Although you could substitute any plant-based milk like almond, flax, hemp, soy, coconut, etc.)

Annette Knocked OUT Her Arthritis Pain

For years I have had increasingly severe arthritis pain in my fingers. It had gotten so bad that I could not straighten them. I also was experiencing neuropathy in my feet with severe burning. This led to me taking more and more pain killers, which just wasn’t working!

I talked to Wayne Garland, and he advised the Structural Lubrication and theAgeless Anti-Inflammatory formulas, in addition to the Life Transfusion, which I was already taking.

I cannot believe how I have improved in such a short time! My fingers are limber again and I can walk without pain.

Thank you Wayne Garland, for the wonderful care you give all of us!

Give Arthritis the Slip – Literally!

For over 20 years now, we have been helping people fight all forms of Arthritis, including associated conditions such as Multiple Sclerosis and Lupus. We get exceptional results, particularly with the use of powerful ionic mineral compounds and anti-inflammatory herbs.

Diet and exercise changes are crucial. Total elimination of all dairy is a must. Did you know countries with the highest consumption of milk, cheese, ice cream and butter also have the highest levels of osteoporosis and arthritis?