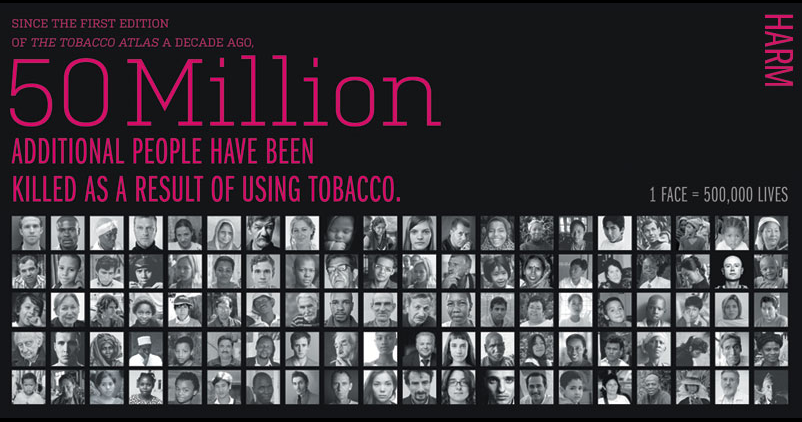 Almost 1 billion men and approximately 250 million women in the world smoke. The report indicates male smoking rates have now peaked, and trends in low-and middle-resource countries indicate slow but sure declines. However, this extremely slow trend is progressing over decades while, in the meantime, tobacco is killing about  5 million men every year. In general, higher-educated men are abandoning tobacco addiction, leaving the smoking habit to poorer, less-educated men.

China deserves special mention because of the enormity of the tobacco problem and the danger it poses. Nearly 60 percent of Chinese men are smokers, and the country consumes more than 37 percent of the world’s cigarettes. China’s monumental addiction is, according to Philip Morris, “the most important feature on the landscape.”

Escalating health and economic tolls imposed by tobacco threaten to impede the stable development of this major world power.

Important findings from the report: (download your own copy at www.tobaccoatlas.org)

“One hundred million people were killed by tobacco in the 20th century. Unless effective measures are implemented to prevent young people from smoking and to help current smokers quit, tobacco will kill 1 billion people in the 21st century,” the report predicts.

“Why aren’t the chief executives of these “Angels of Death” companies put on trial in a War Crimes court like The Hague for crimes against humanity?

Please send me your thoughts, someone has to stand up to this genocide.”

5 Replies to “Tobacco to Kill 6 Million Next Year”